Today I will give you an insight on some of the tools that I use to keep the 5AM club a “Habit” going.  I want to make the distinction of what a habit is. A habit is automatic, has little or no resistance. To form a habit requires momentum, it becomes a little bit easier every time it is practiced (there will be days you will mess-up but this human).  It becomes automatic. When forming a habit I like to think of milestones – 22times, 40times and the grand 66times  (these numbers are based on scientific research). 22 (Top of steep the mountain), 40 (top of the hill), 66 (the habit has somewhat formed).

(actually this article in Forbes describes it very well – http://www.forbes.com/sites/jasonselk/2013/04/15/habit-formation-the-21-day-myth/)

There are some great tools out there to keep track of you habits. I like pen and paper still and resort to it when I cannot get my head about a good process. Once figured out the tool I love using and I have it with me constantly on my iPad, my android phone is a tool called Lift.  Got to https://www.lift.do and setup an account. There are a number of suggested habits to pick from and some of the habits are things you may not of thought of. Great community and you can also follow or be followed if you wish. the application has reminders, plans for notes and can be tailored for number of times per week.

I will write about “habit forming” later in this blog. Advice – Do not stack more than 2-3 habits at a time until you have streak (execute the habit 22 times or more). It does not have to be a perfect streak (we are human – we will sometime mess up) but no huge gaps. 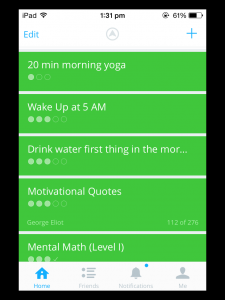 Snippet of a monthly report

The other “hacks” that I use

1. MapMyRun application  – I use it to record all my workouts

2. Take photos of my results if I am working on a machine life a treadmill, rowing machine etc.

The secondary tools are invaluable because one habit I have not formed yet (confession) is making sure my habits are correctly recorded in Lift by days end. The number of times I have not recorded sleeping by 10, or not drinking water 3 times a day is staggering. Lift does not allow you to record retrospectively (for obvious reasons) – so yes, there are obvious gaps in my records.

The journey to the 5AM is a “20 mile march” – you need to strive to be consistent and no matter what and achieve a result or at least get close to it. When I have an “OFF day” where I did not have a goodnight sleep or stayed up too late. I will still make an effort to wakeup at 5.00AM just to ingrain the habit. The trick is that after I wakeup  and checked in, I went straight back to bed to get the extra 1-2 hours sleep. I do this so I do not break the 5AM wakeup habit.   Do I did whatever it takes to achieve the habit !

Learn to overcome a circumstances or obstacles in order  to achieve on the habit. Learn from the 20 mile march story and be like Amundsen reach the target of 20Miles a day no matter what.

Sometimes when I workout I fail to hit my rowing or run times, the most important aspect is my mindset and making sure I are still striving. I have read a lot of articles on Michael Jordan about his never ending ambition is to better himself consistently even when the results were not there.

“I can accept failure, everyone fails at something. But I can’t accept not trying.” – Michael Jordan

” If you’re trying to achieve, there will be roadblocks. I’ve had them; everybody has had them. But obstacles don’t have to stop you. If you run into a wall, don’t turn around and give up. Figure out how to climb it, go through it, or work around it.” – Michael Jordan